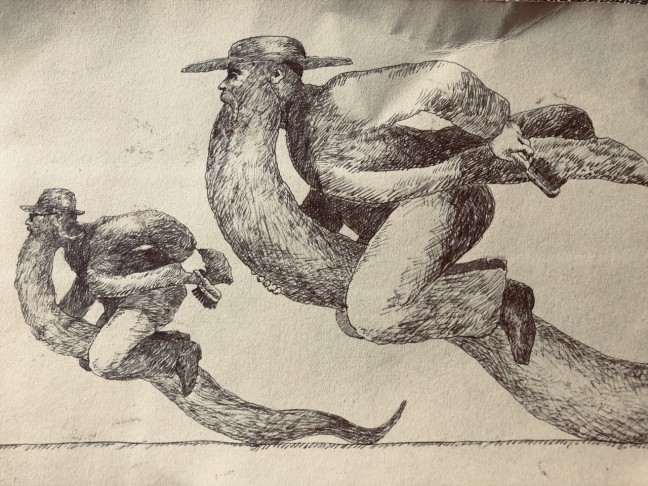 For a thin man, I have a strange tendency to associate key events with food. For instance, I can never think of one of the strangest days I’ve ever spent—at a Hasidic summer camp in the Catskills—without recalling the feast bestowed on us by our hosts.

I had arrived at Camp Rov Tov D’ Satmar that morning. The occasion was a political rally, but I really was there to learn about the Hasidim, so I was early and had no sooner gotten out of the cab from the town when I was surrounded by teenage boys who looked like they had come from an 18th century village in Eastern Europe. Dressed in long black coats and wide hats, some had beards and all had side curls; not one had a sun-tan.

They were gentle and gracious. They asked me who I was. I stated several times that I was a reporter, and they repeated it to each other in Yiddish. One, a 19-year old named David, offered to act as host, and he invited me to walk around with him. So I did, followed by the entire group of boys, and saw a series of low-rise, run-down buildings, some serving as barracks, others as synagogues, and an empty swimming pool with moss growing in the cracks in the cement. One young man was sitting on the ground painting a pair of signs, saying: “Welcome, Abe Beame,” for the mayoral candidate who was visiting that day.

Then the conversation started. At least two boys asked me if I had seen “The Ten Commandments,” the Cecil B. DeMille epic that had been around for about 20 years. Of course, I had seen it. They had heard of it, though they were denied access to television and movies.

Another boy asked me about “My Name Is Michael,” a pop tune that was out then, and seemed to call for a better world. I wasn’t very aware of it.

Finally, one boy asked, “Do you know how we feel about Zionism” That I knew. I had been warned: the Satmar Hasidim were against the secular nation of Israel, believing that a Jewish state should not exist until the Messiah arrives. There were rumors that they had defaced the Israeli embassy to the UN.

Pro-Israel in the conventional way, I couldn’t understand this. I asked them if they would fight if threatened. One kid vehemently said, “Of course we would fight if we are threatened with death!” Then I asked: Didn’t the Holocaust prove that the Jews needed a state? I don’t know why I thought they needed to be educated on this subject. David answered for everyone.

“We have no grandparents!” he said.

Most of the boys left to go to a Talmud class. David remained, and we were joined by an adult, one Rabbi Stein, who invited us into the administration building for a spread of soda, cake and matzos, my first experience in Satmar hospitality.

Now I was no religious scholar, nor a believer in much of anything. But I soon grasped that the whole Satmar set-up rested on the shoulders of one man: the Rebbe, Yoel Teitelbaum, who was now 90 and ailing. They went to the Rebbe, who had rebuilt the community in the U.S. after Work War II and the Holocaust, for everything–for legal advice, for his blessing on marriages, for textual interpretation.

We sat there and snacked. I learned that David lived with his parents and three brothers in a three-room flat that cost $120 a month. His father had a blue-collar job, but David planned go into clerical work. Young men were usually given a year after school when they could continue to live at home while learning a trade. Then, at 20 or 21, they got married with the help of a paid matchmaker, after a long courtship in which the two parties rarely if ever saw each other.

Suddenly there was tumult outside: Abe Beame had arrived, along with the rest of the press pack. David and I went out. The 5-foot tall mayoral candidate spoke briefly and was mobbed when he finished. The boys practically carried him into one of the barracks. I never saw him smile once.

Following this tour, everyone started crowding into cars to move on to the Satmar girl’s camp down the road; David pushed me into one. On the way, we passed a man identified as Israel Zupnik, a middle-aged Hasid who also seemed to be trying to hitch a ride. Mr. Zupnik made a fortune selling Nutola vegetable oil to the U.S. Army in World War II, and he and his wife Thelma were major benefactors to Satmar, I was told; Mrs. Zupnik ran the girl’s camp.

We arrived at Camp Emunah, and I saw the future wives of the boys I had met lined up next the entrance road. They were conservatively dressed, wearing dresses and long socks. One girl presented Beame with a torch, but smeared red paint on his shirt. Again, he didn’t smile. Beame toured the girls’ rooms, with their homemade quilts and curtains.

There was another speech or two. Then we all went into a building, and were served cakes stuffed with almonds and apples, bottles of soda, then plates of blintzes made by Mrs. Zupnik herself, the best I’ve ever eaten anywhere, accompanied by coffee and homemade coffee ice cream.

This partly erased my view of the Hasidim as dour people who did little but gnash their teeth: But it was a short-lived occasion. We were in the middle of Tisha B’av, which commemorates the destruction of the Temple by the Romans in 66 AD and includes a day of fasting. I realized that for these boys—and adults—this event was only a momentary break in the serious daily routine of Talmud, Torah and prayer.