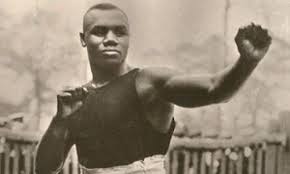 Jack Johnson, newly pardoned by President Trump, had one of the hardest heads ever pounded on by the leather boxing glove. Stylish, arrogant, successful and persecuted, he was, like Muhammad Ali in the 1960s, revered by many for his attitude and skills. But if Johnson was typical of black aspiration in the ring, he was never typical of actual black gain. He was healthy and still trading on his name when killed in an auto crash in 1948, unlike Sam Langford, who died blind, broke and forgotten, except by true aficionados.

Johnson may have been run out of the country and jailed by the white establishment, but he never sank to the misery experienced by his black contemporaries who fought each other for peanuts and were denied the chance to challenge for the world title.

This may be a good time to reflect on the history of black fighters in the heavyweight class.

The first men ever to fight for sport and profit in America were black freemen—Tom Molineaux and Bill Richmond, “The Black Terror.” They practiced their brutal art in the early years of the 19th century, and were close friends, according to the historians. Molineaux became the first American ever to fight for a championship—the heavyweight title—when he met Jim Cribb in London in 1810 and lost by a very tight margin—so close, in fact, that a rematch was held a year later at Thistoleton Gap in the County of Rutland, and Londoner Pierce Egan, inspired by what he had seen, started the first publication ever devoted exclusively to boxing, Boxiana.

Boxing was illegal in those days, and matches were conducted on the sly, at hidden rendezvous, much the same as cock-fighting today. In his book, “The Sweet Science,” A.J. Liebling describes a picture of the second Molineaux-Cribb bout that had appeared in Boxiana. The scene was typical of boxing matches up into the twentieth century.

“In the foreground of the picture there is a whore sitting on her gentleman’s shoulders the better to see the fight, while a pickpocket lifts the gentleman’s reader (watch). Cribb has just hit Molineaux the floorer and Molineaux is falling, as he has continued to do for a hundred and forty-five years since.”

But Liebling adds that “the detail I recall first when I think of the picture is the face of Bill Richmond, also an American Negro, as he sees his man go. He is following Molineaux down with his eyes, bending as the challenger falls, and his face is desolate.”

Egan paid heed to Molineaux by writing: “The hardiest frame could not resist the blows of the Champion; and it is astonishing the Moor stood them for so long.”

It is equally astonishing that boxing stood its illegality for so long—right up to the time of Jack Johnson. If it was difficult for a white man to get along in the sport, it was ten times as difficult for a black man. Talented black fighters could only hope to scrape out living in the ring—nothing more.

John L. Sullivan barred black opponents while champion, saying, “I will never fight a black man.” Sullivan’s leading contender was just such a black man, Peter Jackson, who was finally held to a draw in 61 rounds by Gentleman Jim Corbett after several years of futile waiting. Guess who got the title shot? After losing to Corbett himself for the title, Sullivan is said to have remarked, “Thank God I lost to an American.”

Black fighters of the lower weight classes were never quite that unfortunate, although they came close. The most untalented heavyweight king is always a shade above the middle and welterweight champions in charisma and respect—the title is like a lightning rod. Thus, several lighter black men—Joe Gans, George Dixon, Joe Walcott, Tiger Flowers, Battling Siki—were able to become champion of their divisions during times when a black heavyweight king was unthinkable to the white American public.

Conditions were at their worst, if anything, during Johnson’s unlikely reign. The leading black contenders—Sam McVey, Joe Janette and Sam Langford—were forced to fight each other sometimes as many as 20 or 25 times in every tank town along the pike. The white contenders avoided them if they could, and even Johnson, as champ, refused to fight them. He did face a black contender—Jim Johnson—during his exile in Europe: they fought to a draw in Paris. But the bout lost money. It was the first time two black men every met in a heavyweight title fight, and the last for many a long day.

Sam Langford, the Boston Tar Baby, was typical of the time. He was a slippery boxer with a good punch, and murderous infighting skills. Born in Nova Scotia in 1880, he began boxing in 1902 as a featherweight. Growing up the weight scale, he fought almost every leading boxer of his time: Joe Gans, Joe Walcott, Jack Blackburn (who later trained Joe Louis), Stanley Ketchel, defeating many of them. He beat most of the white hopes of the time: Jim Barry, Jim Flynn, Tony Ross and Sandy Ferguson, and lost a close fight to Johnson who refused to meet him again for the title or otherwise.

As a result, Langford with his deadly skills was forced to go on tour of the sticks, fighting his fellow blacks. He fought Joe Jeanette 14 times, McVey 14 times, and Harry Wills 23 times. He took many a beating, and dished many out. Towards the end of his career he went blind from cataracts, and managed to stay alive in the ring by holding on to his opponents and punching in their direction in the clinch. He retired in 1924, with a record of 151 pro fights, 39 decision wins, 99 knockouts and only 19 decision losses and 4 knockout losses, the remainder being draws and no-decisions. When elected to the Boxing Hall of Fame in 1955, he was living in cellar in Boston. They took up a benefit for him, but he died a year later.

Langford, like Johnson, was hated and feared by a generation of whites. After he fought Gunboat Smith in Boston , the Boston Globe cartoonist wrote some very racist captions for drawings of the fight: “The Tar Baby’s grin, which rapidly vanished,” for flashing white teeth, and “The smoke at times made if difficult to see the Tar Baby,” for a picture of dense smoke and the vague shadow of a human form.

Johnson, of course, didn’t fare any better in the press. One cartoon of the era showed a group of white hopes running away from a black man (looking very much like Johnson) with a spear, vowing never to fight “that coke,” or “that smoke.”

Even Damon Runyon was guilty of racism when commenting on Johnson’s loss to Jess Willard in Havana in 1915, Had Johnson cut a deal with U.S. authorities to throw the fight and be readmitted to the States after his fled to Europe to avoid being jailed on a Mann Act conviction? Runyon wrote that “the case was in the hands of the feds who were not making deals with the likes of Johnson.”

Jack Dempsey, in his autobiography, admitted that he was frightened of Sam Langford and refused to fight him on the way up. Dempsey, however, is better known for his failure to meet another African-American fighter, Harry Wills, who was a leading contender during Dempsey’s championship reign. Wills was entitled to the shot, and at one point had even signed a contract with Dempsey for the bout. Somewhere along the line, Dempsey’s people pulled out, and in Dempsey’s own words, Harry Wills died without ever knowing how he would do in a title fight.

It is unclear today who deserves blame, but Dempsey’s promoter Tex Rickard could share some of it. Rickard had promoted the Jack Johnson-Jim Jeffries match in Nevada in 1910, when Jeffries was brought out of retirement to re-establish the “fistic supremacy of the white race,” and was beaten to a pulp. The match caused repercussions that were still felt up to and after Dempsey’s time. It wasn’t until 1937 that another black fighter received a shot at the heavy title, and only after he had carefully instructed about how behave. He was Joe Louis.

Black heavyweight kings have been predominant since then. But they owe a debt to the McVeys and Langfords, and others who went down unsung.