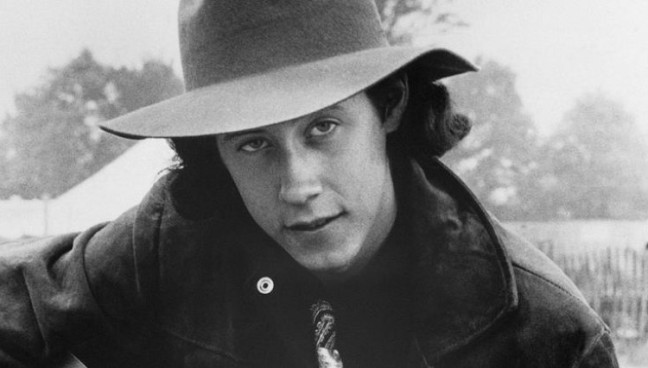 First of all, it’s raining, and things are getting kind of soggy on Festival Field. Second, Joan Baez is sitting in the next seat eating a sandwich, the Goodyear Blimp is flying overhead, and an English group, the Young Tradition, is performing on stage. With that combination of props, it’s hard enough to concentrate on anything, particularly in the middle of a wet Sunday afternoon. And let’s face it, you do feel conspicuous, shall we say, in your conservative Navy haircut.

You’re just about ready to pack up shop and leave when Judy Collins comes on stage and makes the following announcement:

“As you know, all of us in the folk music scene were trained and influenced by one man more than any other, Mr. Woodrow Wilson Guthrie.”

The crowd starts clapping and stamping.

“It’s impossible for Woody to be with us at this time, but we have to carry on his work and ideas, a remarkable young man, who toured Japan with me last month, his son, Mr. Arlo Guthrie.”

More applause, and some people are standing up.

“All I can say is his creativity boggles the mind. Here he is, ladies and gentlemen, let’s hear it for Arlo Guthrie!”

With applause thundering the whole of Festival Field, a skinny ragamuffin-looking boy walks on stage, toting an ordinary folk guitar. He’s dressed in faded blue jeans, a beat-up jacket, and an old felt ranger’s hat, out from which his long curly hair projects on either side like two enormous mouse-ears.

Everyone in the crowd start shouting ‘Alice! Alice!” and the young skinny troubadour on stage says: “You can yell a you want, I’m not gonna sing it.” Then, as he’s tuning the guitar, “You’re probably wonderin’ why I am gonna sing it again, after singing it yesterday. Well, I figure if I sing it enough, you’ll get sick of it and I won’t have to sing it so much any more then. I hope you get good and wet.”

With that, he begins a simple melody line with a voice not quite as raspy as Bob Dylan’s:

You can get anything you want,

You can’t get anything you want,

Just walk right in, around the back, bout a

Half a mile from the railroad track

You can get anything you want at Alice’s restaurant.

Then, strumming the guitar lightly, he begins a talking jag that lasts for something like 25 minutes.

Well, it goes on about his being rejected for the draft after being convicted of littering in Stockbridge Mass. On Thanksgiving day. Twenty-five minutes of it, and each line funnier than the last. Towards the end of the song, he suggests that when faced with the draft, you should ‘enter the Army psychiatrist’s office, singing the chorus of Alice,” and “you’ll probably get rejected.”

“If three people go in and sing Alice’s restaurant, he chants, “then they might think it’s an or-gan-i-zation. If 50 people go in singing the song, they’re gonna think it’s a m o v e m e n t, and friends, it is a movement, it’s the “Alice’s Restaurant Bad Times Massacree Part Two” movement. I’d like you to sing it with me. With feeling. We’ll just wait till comes around again on the guitar. Here it comes.”

The crowd starts singing until he stops and tells them they’re doing terribly and should start again. Finally, he does the last note and chord of the epic, and then it explodes! The crow gives a thundering standing ovation that lasts for ten minutes, George Wein invites him back for the evening convert, and you know, you feel, that here in front of your eyes is standing the man who will be the next king of folk music. The Arlo Guthrie Masacree Parts One, Two, Three and Four movement!

Later that night he climaxes the 1967 Newport Folk Festival with another performance of the song, this time with Joan Baez, Judy Collins, Oscar Bran, Theodore Bikel and the rest joining in on the last chorus. You leave Festival Field with “Alice’s Restaurant” on your brain. Martha Matzke, a Providence Journal reporter, says: “He’s beautiful.” The New York Times calls him the new “festival hero.” Arlo Guthrie is here!

The young man who created that very remarkable song and experience for an audience of 15,000, is the 20 year-old son of Woody Guthrie, the rambling bard who wrote and sang so eloquently of the problems faced by the dust-bowl okies during the great depression 30 years ago. Since the early 1950s, Woody has been in a Brooklyn hospital, with Huntington’s Chorea, a progressively worsening disease of the nervous system. Friday night, the entire cast of festival performers sang Woody’s “This Land Is Your Land,” in honor of his 55th birthday.

Then here is young Arlo—with his own genius, an the only authentic claim among folk singer to being one of the “children of Woody Guthrie.”

In an interview with a Navy reporter Sunday night, he was asked how Woody feels about his son’s career.” He’s all for it,” young Guthrie said. When asked how his father is doing these days, he said: “He’s alive. That’s all I can say.”

Arlo was born in Coney Island, N.Y. and grew up in Massachusetts. He started playing the guitar when he was about six years old. He started performing professionally about two years ago, and has already toured England and Japan.

He said that the visits to his father by such top folk performers as Pete Seeger, Bob Dylan, and Jack Elliot, impressed him deeply.  Besides his father, he lists Jack Elliot as the greatest influence on his writing and singing.

At this points, he has no plans for electrification of his music, or for any protest singing.

“I plan to stay away rom the marching,” he said.

He was genuinely pleased at his reception at the folk festival, and “feels great” about his first record album, which will be released by Reprise next month.

Like his father, he’s done his share of rambling around the country. He has a sister who is currently performing bossa nova music.

His repertoire includes blues and country music and the ‘Alice’ type of thing.